What is Version Control Tool? Explore Git and GitHub

In software development, distributed version control (also known as distributed revision control) is a form of version control in which the complete codebase, including its full history, is mirrored on every developer’s computer. This enables automatic management branching and merging, speeds up most operations (except pushing and pulling), improves the ability to work offline, and does not rely on a single location for backups.

Git is a free, open source distributed Version Control System Tool designed to handle everything from small to very large projects with speed and efficiency. Git has the functionality, performance, security and flexibility that most teams and individual developers need.

According to the creator of Git:
Git is easy to learn and has a tiny footprint with lightning fast performance. It outclasses SCM tools like Subversion, CVS, Perforce, and ClearCase with features like cheap local branching, convenient staging areas, and multiple workflows. It was created by Linus Torvalds in 2005 to develop Linux Kernel.

Why Git came into existence?

We all know “Necessity is the mother of all inventions”. And similarly Git was also invented to fulfill certain necessities that the developers faced before Git.

Whenever developers Design and Develop any application, it is common that multiple versions of that software will be developed in different sites as they will be working simultaneously on updates and also the bug fixes. Bugs are often present only in some versions, We have seen developers shifting back to previous version because of the bugs and then they release new version of software with bug fixes. Therefore for the purpose of locating and fixing the bugs, it is important to be able to retrieve and run different versions of the software to determine in which versions the problem occurs. It may also be necessary to develop two versions of the software concurrently: for instance, where one version has bugs fixed, but no new features, while the other version is where new features are worked on Trunk. So we need to maintain the proper documentation and configuration files along with updated source code. This process is also called as a Version Control or Revision Control or Source Control.

The need for a logical way to organise and control version has existed for almost as long as writing has existed, but version control became much more important, and complicated when the era of computing began. So let’s step back and learn all about Version Control System (VCS).

The Version Control Systems(VCS) can be defined a component of software configuration management, which records the changes to a file or set of files so that it can be recalled in future. However, the primary use of Version control is to **Track changes**
A version control system is mostly based on one concept which is tracking changes that happen within directories or files. Depending on the version control system, this could vary from knowing a file changed to knowing specific characters or bytes in a file that have changed.
There are two types of VCS:

Centralized version control system (CVCS) uses a central server to store all files and enables team collaboration. It works on a single repository to which users can directly access a central server.

The repository in the above diagram indicates a central server that could be local or remote which is directly connected to each of the programmer’s workstation. 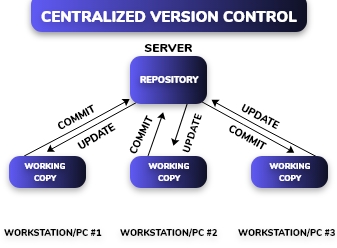 Even though it seems pretty convenient to maintain a single repository, it has some major drawbacks. Some of them are:

This is when Distributed VCS comes to the rescue.

Distributed VCS
These systems do not necessarily rely on a central server to store all the versions of a project file.

You will understand it better by referring to the diagram below: 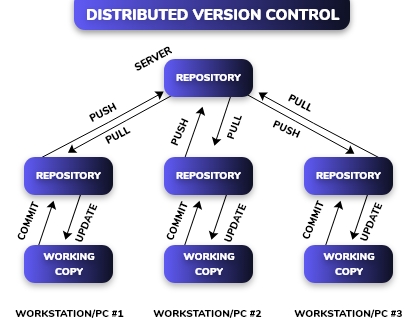 The act of cloning an entire repository into your workstation to get a local repository gives you the following advantages:

Git is a Distributed Version Control tool that supports distributed non-linear workflows by providing data assurance for developing quality software. Git provides with all the Distributed VCS facilities to the user that was mentioned earlier. Git repositories are very easy to find and access. You will know how flexible and compatible Git is with your system when you go through the features mentioned below:

Tools like Git enable communication between the development and the operations team. When you are developing a large project with a huge number of collaborators, it is very important to have communication between the collaborators while making changes in the project. Commit messages in Git play a very important role in communicating among the team. The bits and pieces that we all deploy lies in the Version Control system like Git. To succeed in DevOps, you need to have all of the communication in Version Control. Hence, Git plays a vital role in succeeding at DevOps.

Git compared with other VCTs:
Git has earned way more popularity compared to other version control tools available in the market like Apache Subversion(SVN), Concurrent Version Systems(CVS), Mercurial etc. because of the above stated advantages.
You can compare the interest of Git by time with other version control tools with the graph collected from Google Trends below:

In large companies, products are generally developed by developers located all around the world. To enable communication among them, Git is the solution.
Some companies that use Git for version control are: Facebook, Yahoo, Zynga, Quora, Twitter, eBay, Salesforce, Microsoft and many more.

If you found this blog relevant, check out the DevOps training by Mildaintrainings, a trusted online learning company with a network of more than 125,000 satisfied learners spread across the globe. The Mildaintrainings‘ DevOps Certification Training course helps learners gain expertise in various DevOps processes and tools such as Puppet, Jenkins, Nagios and GIT for automating multiple steps in SDLC.