If you’re looking for ReactJS Interview Questions and Answers for Experienced & Freshers, you are at right place. There are lot of opportunities from many reputed companies in the world. According to research, ReactJS has a market share of about 7.3%. So, You still have opportunities to move ahead in your career in ReactJS. the JavaScript tools are firming their roots in the marketplace and the demand for React certification is increasing exponentially.  Mildaintrainings offers advanced ReactJS Interview Questions 2019 that helps you in cracking your interview & acquire your dream career as ReactJS Developer.

Let us start by taking a look at some of the most frequently asked React JS interview questions:

Q1. How React works? How Virtual-DOM works in React?

React creates a virtual DOM. When state changes in a component it firstly runs a “diffing” algorithm, which identifies what has changed in the virtual DOM. The second step is reconciliation, where it updates the DOM with the results of diff.

The HTML DOM is always tree-structured — which is allowed by the structure of HTML document. The DOM trees are huge nowadays because of large apps. Since we are more and more pushed towards dynamic web apps (Single Page Applications — SPAs), we need to modify the DOM tree incessantly and a lot. And this is a real performance and development pain.

The Virtual DOM is an abstraction of the HTML DOM. It is lightweight and detached from the browser-specific implementation details. It is not invented by React but it uses it and provides it for free. ReactElements lives in the virtual DOM. They make the basic nodes here. Once we defined the elements, ReactElements can be render into the “real” DOM.

Whenever a ReactComponent is changing the state, diff algorithm in React runs and identifies what has changed. And then it updates the DOM with the results of diff. The point is – it’s done faster than it would be in the regular DOM.

Q3. What are the features of React?

Major features of React are listed below:

Q4. List some of the major advantages of React.

Some of the major advantages of React are:

Q5. What are the limitations of React?

Limitations of React are listed below:

JSX is a syntax extension to JavaScript and comes with the full power of JavaScript. JSX produces React “elements”. You can embed any JavaScript expression in JSX by wrapping it in curly braces. After compilation, JSX expressions become regular JavaScript objects. This means that you can use JSX inside of if statements and for loops, assign it to variables, accept it as arguments, and return it from functions. Eventhough React does not require JSX, it is the recommended way of describing our UI in React app.

For example, below is the syntax for a basic element in React with JSX and its equivalent without it.

Equivalent of the above using React.createElement

When using React’s createClass() method, we pass in an object as an argument. So we can write a component using createClass that looks like this:

Using an ES6 class to write the same component is a little different. Instead of using a method from the react library, we extend an ES6 class that the library defines, Component. 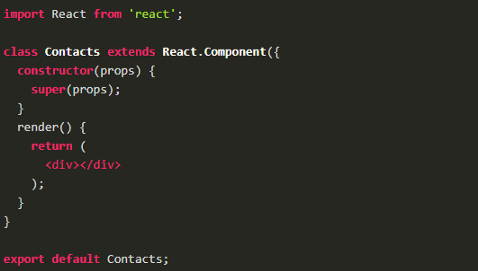 Q9. How is React different from Angular?

Q10. What are the differences between a class component and functional component?

Class components allows us to use additional features such as local state and lifecycle hooks. Also, to enable our component to have direct access to our store and thus holds state.

When our component just receives props and renders them to the page, this is a ‘stateless component’, for which a pure function can be used. These are also called dumb components or presentational components.

From the previous question, we can say that our Booklist component is functional components and are stateless. 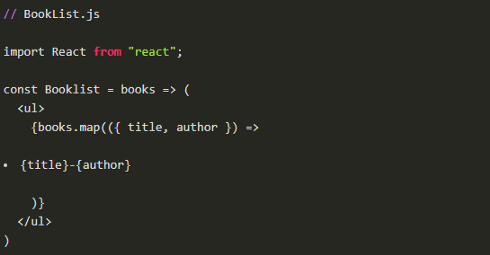 On the other hand, the BookListContainer component is a class component.

Q11. What is the difference between state and props?

The state is a data structure that starts with a default value when a Component mounts. It may be mutated across time, mostly as a result of user events.

Props (short for properties) are a Component’s configuration. Props are how components talk to each other. They are received from above component and immutable as far as the Component receiving them is concerned. A Component cannot change its props, but it is responsible for putting together the props of its child Components. Props do not have to just be data — callback functions may be passed in as props.

There is also the case that we can have default props so that props are set even if a parent component doesn’t pass props down. 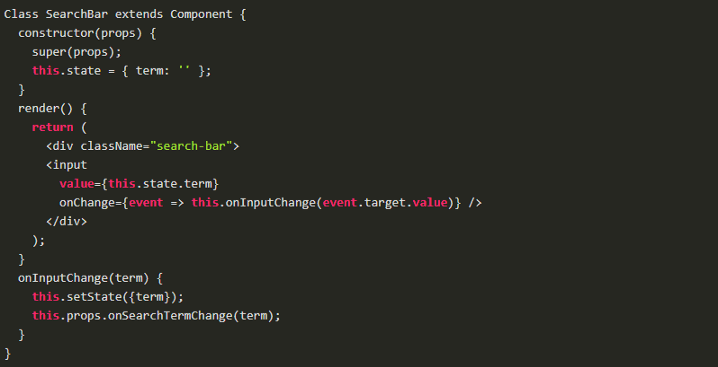 Props and State do similar things but are used in different ways. The majority of our components will probably be stateless. Props are used to pass data from parent to child or by the component itself. They are immutable and thus will not be changed. State is used for mutable data, or data that will change. This is particularly useful for user input.

Q12. What are controlled components?

In HTML, form elements such as <input>, <textarea>, and <select>typically maintain their own state and update it based on user input. When a user submits a form the values from the aforementioned elements are sent with the form. With React it works differently. The component containing the form will keep track of the value of the input in it’s state and will re-render the component each time the callback function e.g. onChange is fired as the state will be updated. A form element whose value is controlled by React in this way is called a “controlled component”.

With a controlled component, every state mutation will have an associated handler function. This makes it straightforward to modify or validate user input.

Q13. What are the different phases of React component’s lifecycle?

There are three different phases of React component’s lifecycle:

The basic idea of Redux is that the entire application state is kept in a single store. The store is simply a javascript object. The only way to change the state is by firing actions from your application and then writing reducers for these actions that modify the state. The entire state transition is kept inside reducers and should not have any side-effects.

Redux is based on the idea that there should be only a single source of truth for your application state, be it UI state like which tab is active or Data state like the user profile details.

All of these data is retained by redux in a closure that redux calls a store . It also provides us a recipe of creating the said store, namely createStore(x).

This is a valid example reducer function:

This store can only be updated by dispatching an action. Our App dispatches an action, it is passed into reducer; the reducer returns a fresh instance of the state; the store notifies our App and it can begin it’s re render as required.

Q15. What is render() in React? And explain its purpose?

Each React component must have a render() mandatorily. It returns a single React element which is the representation of the native DOM component. If more than one HTML element needs to be rendered, then they must be grouped together inside one enclosing tag such as <form>, <group>, <div> etc. This function must be kept pure i.e., it must return the same result each time it is invoked.

Q16. What are controlled and uncontrolled components in React?

This relates to stateful DOM components (form elements) and the difference:

In most (or all) cases we should use controlled components.

Q17. Explain the components of Redux.

Redux is composed of the following components:

It’s important to note that we’ll only have a single store in a Redux application. When we want to split your data handling logic, we’ll use reducer composition instead of many stores.

Q18. What is the difference between React Native and React?

React is a JavaScript library, supporting both front end web and being run on the server, for building user interfaces and web applications.

On the other hand, React Native is a mobile framework that compiles to native app components, allowing us to build native mobile applications (iOS, Android, and Windows) in JavaScript that allows us to use ReactJS to build our components, and implements ReactJS under the hood.

With React Native it is possible to mimic the behavior of the native app in JavaScript and at the end, we will get platform specific code as the output. We may even mix the native code with the JavaScript if we need to optimize our application further.

Q19. What are the advantages of Redux?

Advantages of Redux are listed below:

I hope this set of React Interview Questions and Answers will help you in preparing for your interviews. All the best!

If you want to get trained in React and wish to develop interesting UI’s on your own, then check out the ReactJS with Redux Certification Training by MildainTrainings, a trusted online learning company with a network of more than 50,000 satisfied learners spread across the globe.